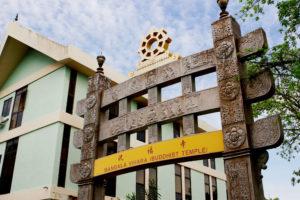 The carvings portray the various stages of the life of Buddha. The Lotus symbolises Buddha’s birth, the Bodhi Tree represents His Enlightenment, the Wheel (or Turning of the Wheel of Dhamma or Pavatana Dhammacakka) depicts the First Sermon to the five ascetics at the Deer Park, Isipatana and the footprints show his presence on earth. These serve as reminders of the Buddha, Dhamma and Sangha.

Sanchi is a small village in Raisen District of the State of Madhya Pradesh, north east of Bhopal India, where several Buddhist monuments from the 3rd century BCE stood. The Great Stupa at Sanchi was originally commissioned by the Mauryan Emperor Asoka in the 3rd century BCE. The Gateways, or Toranas, surrounding the Great Stupa at Sanchi were built after 70 BCE. The four gateways facing North, South, East and West, each has explicit carvings depicting scenes from the life of Buddha and the Jataka stories on Buddha and his earlier births.